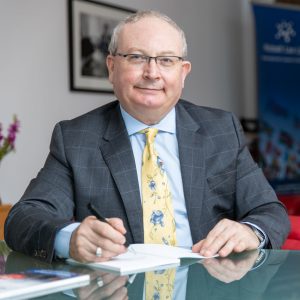 Stefano Lucatello is the Senior Partner and Head of Kobalt Law LLP.

He qualified as a Solicitor in 1988. Languages and Law have always been a very important part of his life and practising career as a Solicitor. Kobalt Law LLP is the culmination of many years of practise both in England and abroad.

Stefano combines his knowledge of English and foreign law to advise clients from around the world.

He practised in Gibraltar as international partner of a Leeds based practice, where he developed his skills in Offshore tax and trust law, advising High net worth individuals to protect their fortunes.

His background of commercial, property, sports and international law, allows him to work with his team members to provide clients with the fullest range of advice.

Over the years Stefano has appeared on television shows, which featured him as an overseas property law expert, working with the likes of Martin Roberts of “Homes under the Hammer”, Carry and David Grant of “Fame Academy”, Diana Moran “The Green Goddess”, Peter Purves of “Blue Peter”, and presenters of “A Place in the Sun” Channel 4’s foreign property show, Jasmine Harman and Johnnie Irvine.

He has filmed abroad in the making of foreign property documentaries.

As an international law expert, Stefano has for many years specialised in representing High networth and Ultrahigh networth clients in the issuing and defending of European Enforcement Orders, under the current EU Regulations, where he has gained notable U.K. Court of Appeal and Spanish court of Cassation successes and Court of Appeal wins related to the validity and service of legal proceedings in other jurisdictions. Stefano also deals with the implementation and recognition of foreign pension splitting orders forcing UK pension companies to pay out sums due toone or other spouse, made when one party who lives out of the U.K. has a pension,located in the U.K. and where a foreign court gives part of such pension to the other spouse under a financial matrimonial order

When he is at home in Yorkshire or London, he can be found in his favourite place….. The kitchen, where he can be found developing culinary delights from around the world.

His dream…. A small and very personal Italian restaurant!